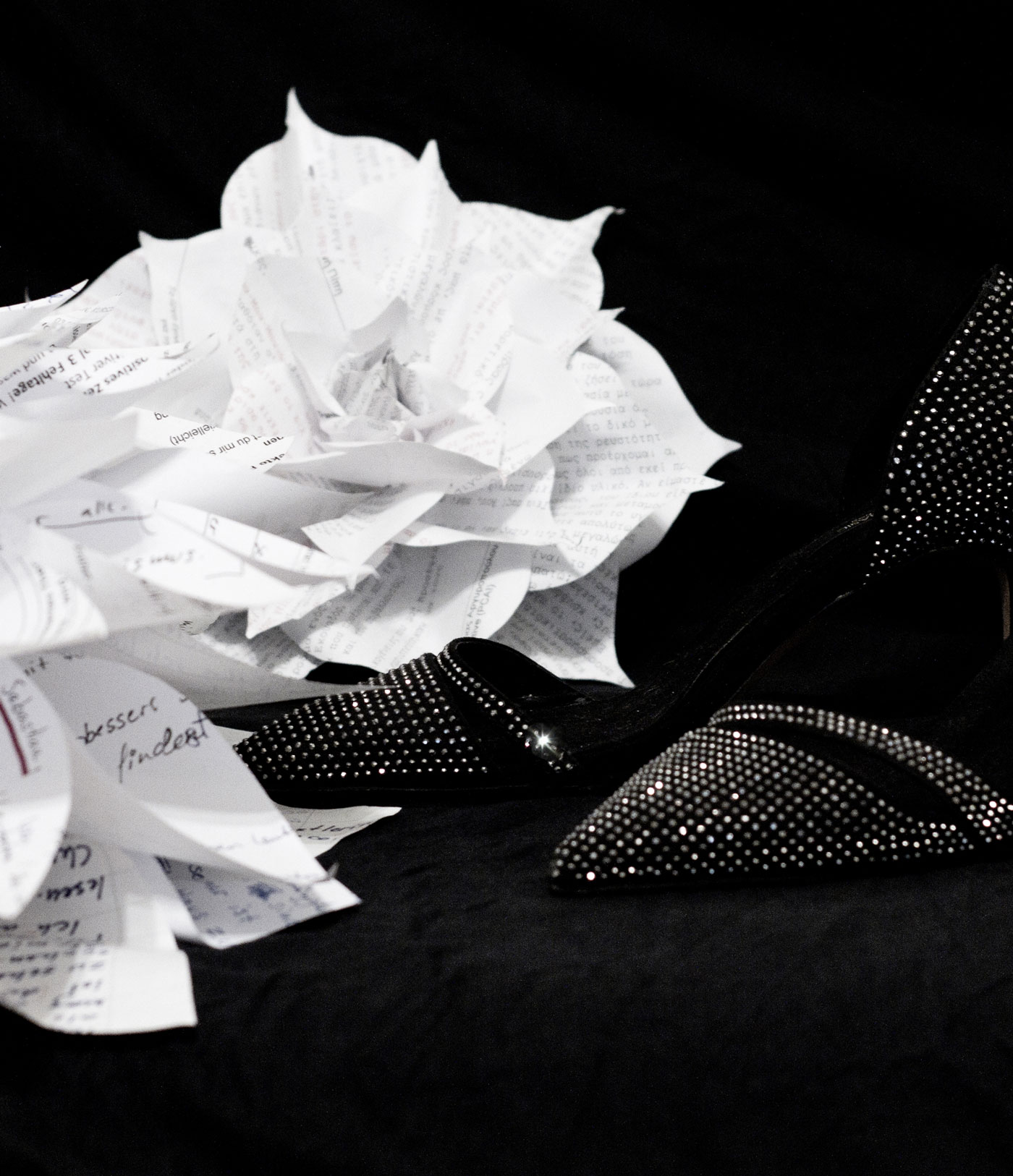 Pille-Riin Jaik
I'm a good girl, I am

We are all born equal.
Everyone always gets what they deserve.
If you sleep more than 6 hours, you are not sleeping fast enough.
I make paper flowers out of my misery and I sew very good as well,
I am a good girl, I am.

Pille-Riin Jaiks first solo show in Vienna is wondering about difference between failure and success. If one lives in a system that they don’t want to support, aren’t these terms the same thing?

Flower selling was historically one alternative profession held by working class, widowed or orphaned females to avoid the morally corrupt system of prostitution. In times of financial crises and political instabilities it occurred that these professions existed simultaneously, although this was mostly a common misinterpretation. Still flower sellers were often blamed to 'sell their own flowers' in the disguise of an innocent profession.

In popular culture these topics were depicted in George Bernard Shaw's play 'Pygmalion' or the more known adaption 'My Fair Lady'. The flower seller Eliza Doolittle, protagonist of the play, is known for her famous line: 'I am a good girl, I am'. The general plot revolves around a working class girl being trained by the arrogant phonetics professor Higgins to become 'a fair lady' through manners, etiquette and mostly language. She gets metaphorically sold to the elite, who find her character and shaping it amusing.

Pille-Riin Jaik (born 1991 in Tallinn, Estonia) is a interdisciplinary video/performance artist and an Estonian immigrant working for a minimum wage in a cafe. She has a Bachelor of Photography from the Estonian Academy of Fine Arts and is currently stealing Austrian tax money as a student in Academy of Fine Arts Vienna. She has participated in several group exhibitions in Estonia, Finland, Lithuania, Sweden, Germany, France, Austria, Japan and has had previously solo exhibitions ‘Halfway’(2015), ‘Confession Pool’(with Liisa Jugapuu and Helena Keskküla, 2015) and ‘There’s another woman behind every woman’ (2016). Her videoworks have been screened in several film festivals around Europe: 21st Ji.hlava International Documentary Film Festival, Diagonale 2018, FrauenFilmTage 2018, VI Kinodot Experimental Film Festival in St. Petersburg, Red Love international video competition in Sofia.